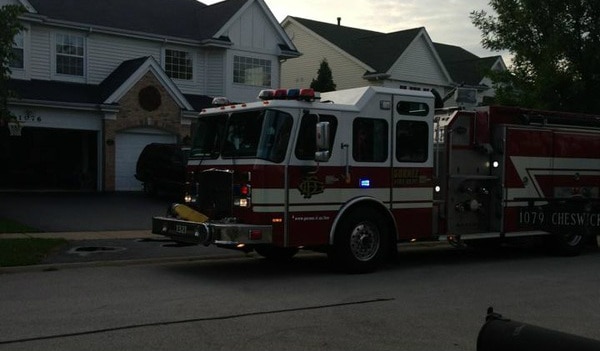 At around 5:45 pm, Gurnee & Grayslake Fire Departments responded to a report of a structure fire at 1000 block Cheswick Drive in Gurnee. Per police first on-scene they reported smoke in the house, once fire units got on-scene they reported nothing showing, a few minutes later command reported a working bedroom fire on the 2nd floor of the residence. About 5-10 minutes later command reported that they had 1 line on the fire and the fire was out, they requested the fire prevention bureau and had Newport FPD and Grayslake respond as change of quarters.  Command also requested board up for 1 window and ComEd to scene. Units on-scene were E1312 A1343 T1331 BC1301 C1300 E1321. Photos are provided by Wesley Zavala.