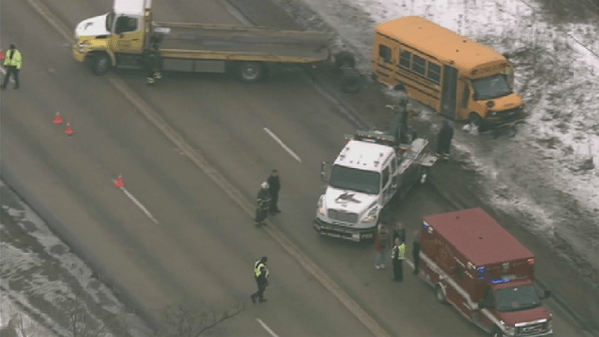 The Lake Villa Fire Department was dispatched for a report of a school bus accident with injuries near 1200 East Grand Ave in Lindenhurst at around 3:35 P.M. today. Upon arrival of Ambulance 242 and Battalion 24, they reported a rolled over school bus.

It was unknown if there was anyone trapped inside the bus, but it is not believed to have been. There was three children transported according to the school’s superintendent. The school bus was the only vehicle involved in the accident and it is being reported that the cause of the accident was a broken axle.

Several followers of our page reported at the time that the road was blocked off and traffic was heavy.

NBC News and other news helicopters were at the scene. Here is a picture of the accident from NBC News’s Twitter page:

Phil Mathis posted a picture of the accident before the bus was rolled back onto it’s wheels: Link to the news article on NBC.
Link to our Facebook Post.
UPDATE: Now another follower of our page is reporting that the superintendent of the school involved has said three kids were transported to the hospital. Some are also now saying it was no injuries, so we are receiving conflicting reports on this. No confirmation yet.
>> Contact the reporter