Clerk injured after armed robbery in Woodstock; 2 suspects on the loose 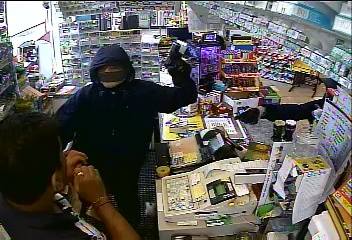 Woodstock police are searching for two suspects following an armed robbery at Sunrise Food and Liquor on Wednesday.

At around 2:40 pm the Woodstock Police Department Patrol Officers responded to Sunrise Food and Liquor, located at 715 McHenry Ave. in reference to an armed robbery.

Upon arrival of responding officers, a male employee was located bleeding from his head.

It was learned that two male subjects wearing masks and gloves entered the store each brandishing pistols. One suspect jumped over the cashier counter, struck the employee on his head with a pistol and demanded money.

After being given an undisclosed amount of money the suspects fled the store on foot heading northbound towards the rear of the store.

The McHenry County Sheriff’s Office K-9 searched for the suspects but with unsuccessful results.

The employee was transported to a local area emergency room by the Woodstock Fire/Rescue District to be treated for a non-life threatening injury.

Suspect #1 was described as wearing dark colored pants, a blue raincoat, black shoes and dark gloves. He concealed his identity by wearing a lighter colored mask that concealed his face.

It appears that the suspect is a white male and he possessed a semi-automatic pistol with a silver slide and black frame. He was also the individual who struck the store employee in the head with the pistol numerous times.

Suspect #2 was described as wearing a dark-colored sweatshirt, with a white t-shirt exposed by his waistline, and was wearing a dark baseball style hat with white lettering.

He concealed his identity with a dark colored mask and possessed a black hammerless revolver/pistol and was wearing gloves with a dark palm and a lighter color top of the palm.