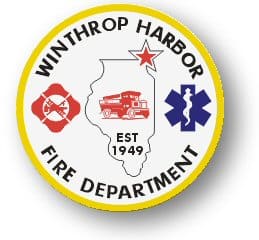 A 4-year-old girl was rescued from Lake Michigan by bystanders after she was separated from her family in the water on Thursday near Winthrop Harbor.

The Winthrop Harbor Fire Department was called at 5:27 p.m. for a report of a possible water rescue at the north swimming beach of Northpoint Marina, according to Fire Chief Justin Stried.

Stried said that initial reports were that a group of teenagers were missing one of the people in their group. However it was eventually determined that it was actually a 4-year-old girl who was separated in the water from her group of family and friends.

Officials said that the girl was found minutes later struggling in the water near the rocks on the south end of the swimming beach.

The girl was rescued from the water by bystanders and appeared to have non-life threatening injuries, Fire Chief Stried said.

By the time firefighters and police officers arrived the victim was with her mother. Authorities said that she was conscious and breathing when she was assessed by an ambulance crew.

Fire Chief Stried said that the 4-year-old was transported to Vista East Medical Center in Waukegan for further assessment and ongoing care.

“We urge members of the public to be extra cautious when swimming in Lake Michigan, even if conditions appear calm. The currents and undertow can change without notice and even the strongest swimmers can struggle to control themselves,” Stried said.

“This is especially important when children are in or near the water, parents and caretakers are urged to stay within arm’s reach and never take their eyes off their children playing in the water.”