A Richmond man has been arrested and charged after he pointed a gun at a man during a road rage incident in Richmond, police said.

Brian Schimian, 41, of Richmond, was arrested and charged with aggravated assault with a deadly weapon, disorderly conduct and reckless driving.

The incident happened around 4:45 p.m. Tuesday in the northbound lanes of Route 12 just north of Broadway Road in Richmond.

Bart Surroz, of Lake Geneva, Wisconsin, posted a video on Facebook, which shows Surroz getting out of his car and walking up to a red Jeep Wrangler.

Schimian is seen sitting in his Jeep and pointing his concealed carry gun at Surroz. Schimian yells at Surroz to, “Get in your car.”

Schimian is seen speeding away in his Jeep from the scene. Schimian also posted video on Facebook Tuesday evening from his Jeep’s dashcam.

“All I did was get out of my car because he kept beeping at a dead stop. I thought I hit something or he was trying to alert me that I’m dragging something behind my car. I had no idea he was upset and angry with me,” Surroz said.

“I don’t even know why! He was just behind me holding on the horn so I got out in dead stop traffic trying to figure out what the heck is going on,” he added.

Richmond police were called but they did not initially arrest Schimian. After video surfaced of the incident on Facebook, police said they were investigating. The McHenry County State’s Attorney’s Office approved the charges Thursday and Schimian was taken into custody.

“The Richmond Police Department reminds all drivers to follow the rules of the road, and to report reckless driving by calling 911, when it is safe to do so,” Richmond Police Chief Ciro Cetrangolo said.

Richmond police will be conducting increased patrols and enforcement targeting aggressive and reckless driving, with a focus of the downtown Richmond area, Cetrangolo added. 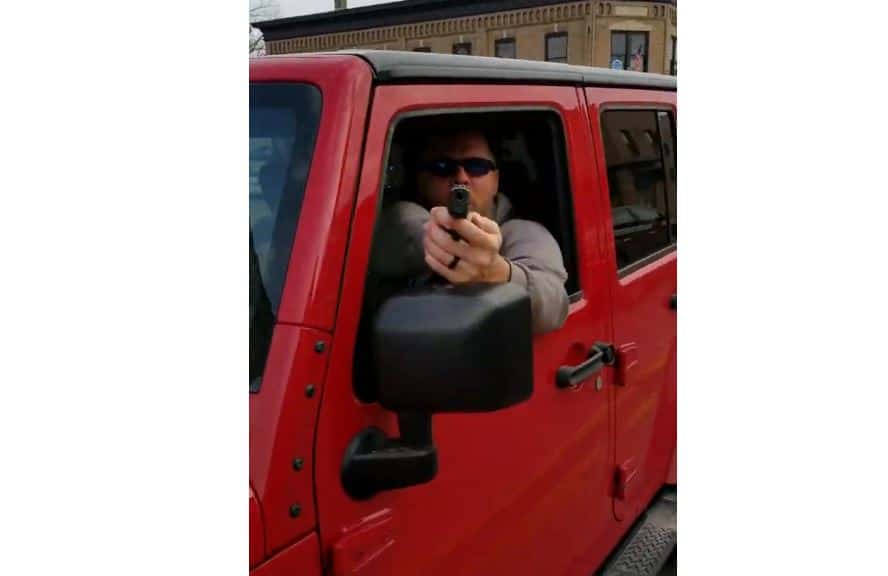