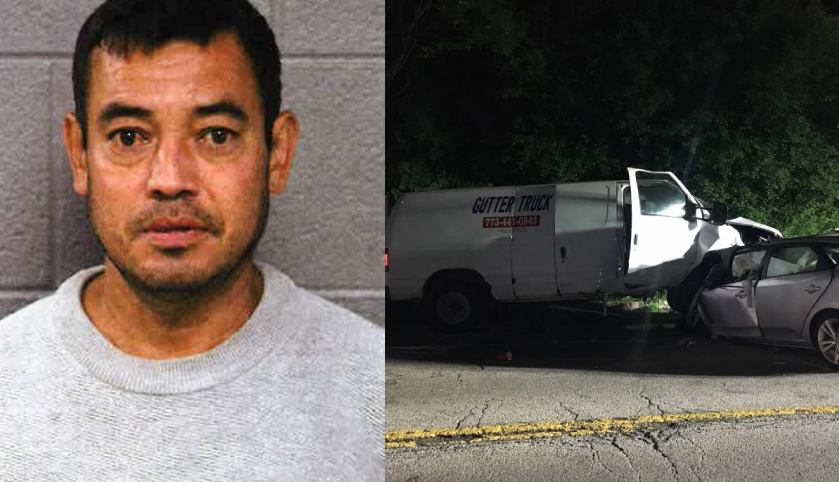 A Round Lake Beach man wanted for allegedly driving drunk and killing two women in a crash near Grayslake last month was captured as he tried to escape the U.S. for Guatemala, police said.

Victor H. Ortiz, 51, of the 1400 block of Kildeer Drive in Round Lake Beach, was arrested on a warrant Saturday for four counts of aggravated driving under the influence of alcohol and two counts of reckless homicide.

Ortiz was the driver of a Ford E-350 van that crashed head-on into two vehicles June 8 in unincorporated Grayslake, killing two women.

Barbara Gaulke, 56, of Ingleside, and Sandra Forscht, 64, of Round Lake, were identified as the two women killed in the crash, Lake County Coroner Dr. Howard Cooper said.

Ortiz was traveling southbound on Fairfield Road north of Route 60 when he crossed the double yellow line and went into the northbound lanes. His van struck the driver’s side of a northbound Honda Odyssey, driven by a 42-year-old Hainesville man.

Ortiz and driver of the Honda were transported to Advocate Condell Medical Center in Libertyville with non-life-threatening injuries.

On Friday, investigators obtained the blood and urine results of the Ortiz, which showed he was driving under the influence of alcohol during the time of the crash.

After receiving the results, investigators received a tip that Ortiz was trying to flee the country to Guatemala and authorities secured the arrest warrant for Ortiz.

Covelli said that police received information that Ortiz might have boarded a charter bus, which was traveling to Texas and eventually to Guatemala.

Chicago Police Department tactical officers determined Ortiz was a passenger on a Turimex Bus, which departed Chicago around 1:30 p.m. Saturday.

A short time later, police officers located the bus in the area of Interstate 57 and 111th Street in Chicago. Police conducted a traffic stop on the bus and took Ortiz into custody.

“Because of the thorough and fast investigation conducted by Sheriff’s Crash Investigators along with the terrific assistance provided by Chicago Police 10th District Tactical Officers, we took an offender who killed two people – because he was driving drunk – into custody, before he could flee from the country,” Lake County Sheriff John Idleburg said.

“I’m pleased the first-step of justice was served for the families of the victims, which was possible because of strong law-enforcement collaboration.”