There are over 25,000 confirmed coronavirus cases in Illinois as officials announced 80 additional deaths in the past 24 hours.

Governor J.B. Pritzker has said that despite the increase in numbers, the state is bending the curve of cases. At his Wednesday press conference, Pritzker said that he is seriously considering a mask requirement in public.

“I think it’s something that, when I look at the mitigation measures that we should be contemplating and making adjustments to, that is one I think might be seriously important to consider in the period going forward,” he said.

Pritzker announced that the coronavirus has hit the state’s budget hard. In the fiscal year ending June 30, Illinois is facing a $2.7 billion shortfall. Experts predict that fiscal year 2021 the budget will experience a $6.2 billion gap.

“This is a public health crisis – but it is accompanied by massive economic disruption that’s unprecedented in modern history. Illinoisans are all too familiar with the pain the lack of a state budget can cause, so let me just say up front: we will not go without a state budget,” Pritzker said.

“We will need to make extraordinarily difficult decisions on top of the difficult decisions we’ve already made, but together with the state legislature we will make them and we will do so with an unswerving dedication to fairness. In the midst of a pandemic, I am more resolute than ever to protect those who are suffering physical and financial hardship from it,” he added.

On Tuesday, Pritzker said the doubling rate, which is the number of days it takes to double case counts, deaths, or hospitalization, has increased substantially. The higher the number is, the slower the growth.

“To be clear, there is nothing good about twice as many people having this virus or, worse, dying from it, no matter how long the increase takes,” Pritzker said at his Tuesday press conference.

“But we won’t get to zero cases overnight. The fact that our doubling rate continues to increase in every metric is a clear demonstration that there is a deceleration of virus transmission. We are, in fact, bending the curve,” he added.

33% of all ICU beds and 58% of all ventilators in the state remain available.

“The challenges workers and families are facing today is something my whole administration thinks about each day as we are simultaneously attempting to fend off the health consequences of coronavirus,” Pritzker said on Monday.

“We are working around the clock at all levels to provide unemployment benefits to the unprecedented number of Illinoisans who have lost their jobs to the spread of COVID-19. I will continue to do everything in my power to get our residents the support they need to get through this crisis,” he added.

Between March 1 and April 4, Illinois has received 513,173 unemployment claims. That is larger than the total number of claims in all of 2019 and five times greater than claims filed in the first five weeks of the 2008 great recession. 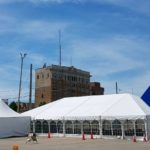 Illinois to shut down all community-based COVID-19 testing sites due to sharp drop in demand IDPH issues warning that COVID-19 cases are slowly rising in many areas of Illinois Governor signs bill that will require Illinois schools to report teacher sexual misconduct to board, parents