Illinois Gov. J.B. Pritzker announced Friday when indoor dining and youth sports can resume and he provided an update on the state moving to the next vaccine rollout phase.

Pritzker said during a Friday press conference that Regions 1, 2, and 5 have been moved from Tier 3 to Tier 2 mitigations.

All regions in Illinois’ resurgence mitigation plan were moved to Tier 3, which has the strictest restrictions, shortly before Thanksgiving to prevent a surge of cases going into the holidays.

Illinois has since seen a decrease in COVID-19 test positivity rates and hospitalizations throughout the state.

“After weeks of careful consultation with public health experts to balance the need to save lives and support our hospital systems with protecting our economy, the Governor announced that regions could resume moving out of the tiered resurgence mitigations (Tier 3, Tier 2, and Tier 1) and back into Phase 4 on a data-driven basis,” the governor’s office said in a statement.

The governor also announced adjustments to the resurgence mitigations in light of ramped up vaccination efforts across the state.

Tier 1 of the resurgence mitigation plan now allows restaurants and bars to resume indoor dining with limited capacity. Youth and recreational sports may also resume play following the Illinois Department of Public Health’s (IDPH) All Sports Policy in all regions that have been moved out of Tier 3.

Region 9, which includes Lake and McHenry counties, is still in Tier 3 due to it being under the 20% threshold for available hospital beds. Once that metric is above 20% for at least three days then the region will move to Tier 2 mitigations.

The Illinois Department of Public Health will continue to monitor the regional metrics and move regions down to Tier 2, Tier 1, and ultimately back to Phase 4 of the Restore Illinois plan on a rolling basis.

Restaurants and bars in regions that are in Tier 1 can open indoor dining with capacity limited to the lesser of 25 people or 25% room capacity. Establishments must serve food and indoor tables must be limited to no more than four people, with reservations limited to two hours.

Low-risk level sports, which include baseball, cross country and track, gymnastics and swimming, will be allowed to have intra-conference play, team scrimmage and no contact training in Tier 2. Out-of-conference play and tournaments will resume in those sports in Tier 1.

Medium-risk level sports, which include soccer and volleyball, will be allowed to have no contact training and team scrimmage in Tier 2. Intra-conference play will resume in those sports in Tier 1.

High-risk level sports, which include basketball, football, hockey and wrestling, will be allowed to have no contact training in Tier 2. Team scrimmage will resume in those sports in Tier 1.

Pritzker said that Phase 1A of the state’s vaccination administration plan, which includes frontline healthcare workers and residents and staff of long-term care facilities, is on track to be “substantially completed” by next week.

The entire state will move into Phase 1B on January 25. This phase will allow frontline essential workers and residents over 65 years old to be vaccinated.

“While vaccine shipments from the federal government remains limited, the state is aggressively building out its capacity to prepare, with hundreds of additional pharmacy sites coming online starting Monday and the Illinois National Guard deploying to support local health department vaccination sites starting Tuesday, both initially only available to the 1A population,” Pritzker said.

The Illinois National Guard (ILNG) will deploy two teams to two sites in Cook County. The guard is also partnering with St. Clair County to deploy to sites there in the coming weeks alongside additional deployments statewide.

“As the state moves forward with its plan and continues to build out capacity, smaller independent pharmacies, urgent care clinics, doctors’ offices, and workplaces will all be coming online to serve as vaccination sites,” the governor’s office statement said.

“Additional teams from the ILNG will also deploy to regions across the state to stand up new sites and build out additional capacity at existing sites. More information on locations and how to make appointments will be available to the public on a website to be launched prior to the start of Phase 1B,” the statement added.

To view a list of all restrictions and what each resurgence tier means, click here to read the full document. 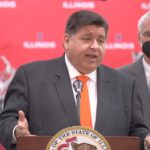