The family of a 16-year-old boy that died of drowning in Waukegan on Sunday has created a fundraiser for funeral expenses and said the teen was “the most kind soul.”

An autopsy performed on Monday on Jesus Garcia, 16, of Park City, showed he died as a result of drowning, according to Lake County Coroner Jennifer Banek.

The Waukegan Fire Department and Waukegan Police Department responded around 6:25 p.m. Sunday to the Waukegan Municipal Beach, 200 East Sea Horse Drive in Waukegan, for a report of a person drowning call.

One of the victims was identified as Garcia, Banek said.

Garcia was in the water near a pier east of the beach where the red and white lighthouse is located, Soler said.

The Mutual Aid Box Alarm System (MABAS) was activated to bring numerous fire department divers and boats from across Lake County to the scene.

Garcia was removed from the water before firefighters arrived. He was unconscious and not breathing, Soler said.

Paramedics began performing lifesaving measures on the boy. He was transported by ambulance to a local hospital where he was pronounced dead.

A 15-year-old boy was also removed from the water in the same area, Soler said. He was transported to a local hospital for precautionary measures.

“We lost a beautiful, strong, smart, humble and most kind, soul. Jesus has definitely left his mark in our hearts forever. Our family is devastated, broken, lost of words,” Lupita Garcia said in the post.

“Jesus will be very dearly missed during these hard times we would from the bottom of our hearts appreciate anyone who would want to contribute with future funeral expenses,” she added.

The investigation into the boy’s death continues by the Waukegan Police Department and Lake County Coroner’s Office. 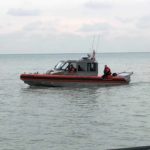