The Gurnee Police Department is asking for the community’s vote in a canine grant contest which will help the department fund a new canine unit after both of their canines retired this year.

The department said in a social media post that they were nominated for the 2021 Aftermath K9 Grant, which offers grants totaling $25,000 to ten law enforcement agencies.

The community can vote for the Gurnee Police Department each day starting tomorrow until October 26.

The department asks the community to like Aftermath’s social media posts and mention they are voting for the Gurnee Police Department.

The votes will be counted and the winning law enforcement agencies will be announced on October 28, according to the grant contest terms.

The nomination for the grant comes after both of the department’s canines retired this year.

Both canines were added to the department in 2014.

Both Bear and Hunter were deployed over one thousand times and are credited with assisting over two dozen police agencies and leading to over one hundred arrests, collectively. 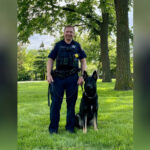