A man was arrested after he allegedly punched a woman in the face and carjacked her in the parking lot of a Round Lake Beach shopping center before trying to flee police.

The incident happened around 11:50 p.m. on October 30 in the parking lot of Big Lots, 400 West Rollins Road in Round Lake Beach, court documents show.

A suspect, identified as Branley J. Escalante, punched a woman in the face with his fist, a criminal complaint said.

Escalante, 21, of the 300 block of Meadow Green Lane in Round Lake Beach, then took the woman’s 2020 Honda Civic by force, the complaint said.

Court documents show Escalante caused a vehicle crash while driving recklessly in the stolen Honda and tried fleeing from police.

Officers with the Round Lake Beach Police Department took Escalante into custody a short time later.

Escalante was also cited for reckless driving, fleeing to elude an officer, leaving the scene of a vehicle crash and driving on a revoked license.

Escalante remains held in the Lake County Jail and would have to post $25,000 cash in order to be released.

A preliminary hearing is scheduled for December 2. 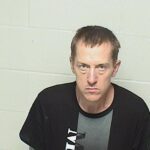