Gov. JB Pritzker has signed legislation that will allow for the expanded use of cameras to aid law enforcement in investigating crime on expressways and highways in Illinois.

“There is nothing more important than keeping Illinoisans safe—in our schools, in our parks, and on our expressways,” Pritzker said.

“The tragic incidences of gun violence on our highways requires aggressive and intentional action. By signing this bill, law enforcement agencies will have the tools to respond to criminal activity in a timely and efficient manner—ensuring the safety and security of our residents, while holding perpetrators accountable,” Pritzker said.

“ISP now routinely uses this technology to track down expressway shootings and carjacking suspects, so the expansion of this technology across Illinois expands our ability to protect our interstates and bring violent criminals to justice,” Kelly said.

[Suggested Article]  No injuries after semi-truck drives off Interstate 94, lands in pond near Libertyville

The state’s FY23 budget included $20 million to expand the technology. The legislation is effective immediately.

“I am proud to advance legislation that will help our families feel safer and provides law enforcement the additional tools they need to investigate crimes and ensure justice is served,” Murphy said.

Pritzker also signed House Bill 260, which allows for the use of expressway cameras along Jean-Baptiste Pointe DuSable Lake Shore Drive.

The new laws will give law enforcement agencies the ability to use images from the cameras to investigate shootings, vehicular hijacking and other criminal activities.

In early 2021, ISP received a $12.5 million grant to cover the costs of engineering, permitting and labor associated with the purchase and installation of readers, controllers, servers/software, electrical power and communications equipment required to install ALPR systems.

In the first phase, ALPRs were installed on the Dan Ryan expressway during the summer and fall of 2021.

The second phase was recently completed for a total of 150 ALPRs on numerous expressways. For the final phase, ISP is installing 150 more ALPRs for a total of 300 under the initial grant.

The funding and installation of ALPRs stem from the Tamara Clayton Expressway Camera Act, which was signed into law in July 2019 and became effective on January 1, 2020.

Clayton was on her way to work on February 4, 2019, when she was shot and killed while driving on Interstate 57 near Cicero Avenue. 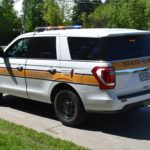