Two active-duty U.S. Military members who are based in Lake County, including one who lived in Gurnee, were both killed in a murder-suicide shooting in Wheeling, police said.

Wheeling Deputy Police Chief Al Steffen said officers responded around 4:50 a.m. Sunday to a 911 call for a person down in the roadway near Lakeview Drive and Buffalo Grove Road in Wheeling.

Responding officers found two individuals — a male and a female — who were both deceased.

The two had gunshot wounds and a handgun was also found in close proximity, Steffen said.

The two were identified Monday as Travis Stephens, 37, and Ajah Barnes, 26.

Stephens and Barnes were active-duty military and assigned to Naval Station Great Lakes base near North Chicago, Steffen said.

Stephens was residing in the 1500 block of Hunter Drive in Wheeling and Barnes, a Gurnee resident, was visiting him.

[Suggested Article]  'We will not forget these three angels': Community and officials gather in Round Lake Beach after father murders his 3 children

Steffen said that it was determined from witness interviews that Stephens and Barnes were in a relationship.

The two had an argument overheard by several people.

The argument spilled into the parking lot where damage was done to each other’s vehicles.

Steffen said that Barnes left on foot and Stephens returned to his apartment, retrieved a handgun and went looking for Barnes.

The Northern Illinois Crime Laboratory will be used to conduct a thorough analysis of all items recovered and the results will be shared with the Cook County Medical Examiner’s Office.

U.S. Naval authorities were contacted and assisted in making notification to the families of Stephens and Barnes.

Steffen said that investigators will continue to piece together what occurred over the previous hours leading up to the incident.

[Suggested Article]  'Unspeakable evil': Father accused of murdering his own 3 children inside Round Lake Beach home

There is no threat to the community, he added. 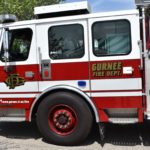