A McHenry man has been sentenced to five years in prison for throwing urine onto corrections officers on two different occasions while being held in the McHenry County Jail.

Nicholas B. Hitztaler, 23, of the 800 block of North Melrose Court in McHenry, has been held in the McHenry County Jail since November 24, jail records show.

He was being held on a $3,000 bond for violating an order of protection.

Court records show Hitztaler was charged on March 24 with aggravated battery of a peace officer, a Class 2 felony.

A criminal complaint said a McHenry County corrections officer was conducting well-being checks in the jail on March 4.

Hitztaler “threw urine” onto the officer’s shirt and pants, the complaint said.

Hitztaler had been accused less than a month prior of throwing a “liquid substance containing urine” onto a different corrections officer at the jail on February 10.

He had been charged with aggravated battery of a peace officer, a Class 2 felony, in that case.

In exchange, prosecutors dismissed charges against Hitztaler in unrelated cases.

Hitztaler had been facing a charge of felony criminal damage to government property after he allegedly used a broom to hit a wall clock, causing the clock to fall to the ground and break on February 10 in the jail.

McHenry County Judge Robert Wilbrandt sentenced the man to three years in the Illinois Department of Corrections for the Class 2 felony and two years for the Class 3 felony.

The sentences are consecutive and will be served at 50% in accordance with truth-in-sentencing guidelines.

[Suggested Article]  Family, pets escape without injury after house fire that caused $150,000 in damage in Algonquin

Hitztaler will also receive credit for time served in the county jail awaiting his cases. 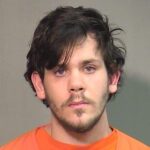 4 years in prison for Crystal Lake man who pleaded guilty to attacking, injuring man in McHenry