Detectives are investigating after a 21-year-old man was hospitalized with serious injuries after being shot in front of a residence in Beach Park early Saturday morning.

The Lake County Sheriff’s Office was dispatched to a call of shots fired in the 11000 block of West 33rd Street in Beach Park around 1 a.m. Saturday.

A 21-year-old man, who was present at the residence but does not reside there, had been shot.

The Beach Park Fire Department was dispatched to the scene and paramedics transported him to a local hospital.

Deputies determined multiple rounds were fired at the residence from the outside.

The victim had been outside when the shooting occurred.

[Suggested Article]  'Your children, by your hand, lost their mother:' Judge sentences Deerfield man to 65 years in prison for killing wife

An alert broadcasted over the Illinois State Police Emergency Radio Network (ISPERN) reported the suspect vehicle was possibly a minivan that fled westbound from the scene.

Anyone with information about the shooting is asked to contact the Lake County Sheriff’s Office Criminal Investigations Division at 847-377-4250.

3 people shot, 1 critically, during shooting in parking lot of liquor store in Beach Park Man dies in hospital after shooting that left 3 wounded in front of Beach Park liquor store 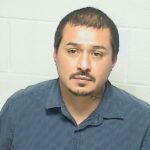