A 29-year-old woman was ejected and killed after crashing her car into a wall on Interstate 294 near Deerfield early Saturday morning, state police said.

The Illinois State Police responded around 2:08 a.m. Saturday to the northbound lanes of Interstate 294 at Lake Cook Road in Deerfield.

District 15 troopers arrived to find a white 2010 Infiniti G37 sedan that crashed near the 52.75 mile marker.

A preliminary investigation shows the Infiniti was traveling northbound at a high rate of speed.

For unknown reasons, the driver of the Infiniti lost control of the vehicle and struck the inner wall bridge support of Lake Cook Road, state police said.

The driver, a 29-year-old Tinley Park woman, was ejected from the vehicle and sustained fatal injuries.

She was pronounced deceased at the scene, state police said.

No passengers were in the vehicle and no other cars were involved in the crash.

Police shut down the northbound lanes of Interstate 294 south of Lake Cook Road for the crash investigation.

Traffic was diverted off at Lake Cook Road until all lanes were reopened around 7:30 a.m. Saturday.

An autopsy is being scheduled on the woman, whose identity is being withheld. 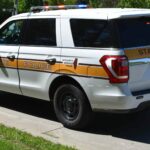