The National Weather Service says that severe storms capable of producing 75 mph winds and torrential rain are expected Tuesday afternoon into the evening in northern Illinois.

The alert said that “explosive thunderstorm” development is expected Tuesday afternoon over northeast and eventually most of northern Illinois into northwest Indiana.

Some of the storms could become severe with the primary threat being damaging winds up to 75 mph, the NWS said.

Some of the thunderstorms could produce torrential rainfall, which could result in localized flash flooding problems.

Heat indices could reach 105 to 110 degrees Tuesday, the NWS said.

The storms are expected to develop in the area between 3-5 p.m. with coverage expanding south and west into the early evening.

The NWS has also issued a flood watch for the Chicago metro area and Rockford area due to this evening’s heavy rainfall. 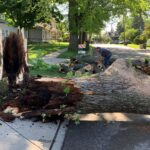