A man, who police say was in his late teens, died after being shot in the parking lot of an apartment complex in Waukegan Tuesday evening.

The Waukegan Police Department responded around 10:20 p.m. Tuesday to the 2400 block of Samson Way in Waukegan for a call of shots fired.

The victim was found in the parking lot of an apartment complex.

The victim was transported by Waukegan Fire Department paramedics to an area hospital where he was pronounced dead from his injuries.

Florip said the victim was an adult male in his late teens. He was a Waukegan resident.

The man’s identity will be released following an autopsy by the Lake County Coroner’s Office.

[Suggested Article]  'This was all so sudden': 14-year-old girl identified after being killed by hit-and-run driver in Waukegan

Numerous shell casings were recovered at the scene. A semi-automatic handgun was also recovered.

Police did not say how many casings were recovered or what role the recovered gun plays in the investigation.

Detectives believe the offender or offenders fled the scene in a light-colored vehicle, possibly an SUV, Florip said.

No one is in custody yet. Anyone with information on the case is asked to call the Waukegan Police Department tip line at 847-360-9001. 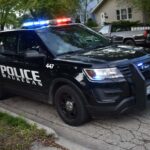