The plane conducted an emergency landing on Milwaukee Avenue due to the issue after being unable to restart the engine.

The plane did not hit any vehicles and no one was injured in the incident, Vernon Hills police said.

“It’s not everyday when you see a plane land on Milwaukee Avenue. Looks like a textbook landing, given the circumstances,” fire officials said.

Libertyville olice said the incident “might of been a first for us” and they were glad everyone was safe.

Records show the plane had departed Muncie, Indiana around 8:40 p.m. Friday and was en route to Campbell Airport in Grayslake.

The plane appeared to have been flying northwest entering the Libertyville area when it made an abrupt left turn and flew south as it made the landing on the roadway.

The plane was removed from the roadway and placed onto a flatbed tow truck. It was towed to Chicago Executive Airport in Wheeling.

Police say they caught Maryland man meeting up with child for sex in Libertyville Prosecutors say man intentionally hit another man with car, dragging him 500 feet in Libertyville 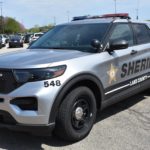